To be a solid IT project manager, be more flexible 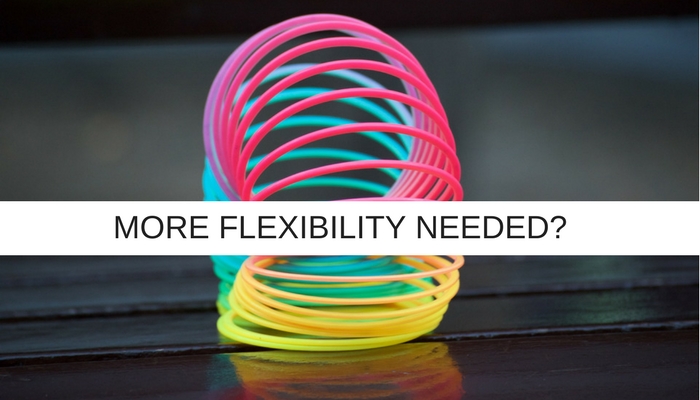 Did you know that less than 3% of companies actually finish their projects successfully? It is true, and it's a statistical fact that many...
Read more

“You need to be more solid, steady, dependable, consistent – you’re all over the place,” I told an experienced IT Project Manager friend who is having one of those blips where nothing goes right.

I thought and answered, “You need to be more flexible.”

“Great advice David! Well done! You need to be both solid and flexible. You GENIUS!” The look on the face of my friend said.

But yes, actually. Why not?

Click on your favourite dictionary or thesaurus website (what do you mean you don’t have a favourite?!)

Into the search box type “solid”. Scroll down to Antonyms. Does it anywhere suggest that solid and flexible are opposites? No? Thought not. Now do “steady”, “dependable” and finally “consistent”. Is “flexible” the antonym of any of these?

It’s one of the biggest misnomers in IT Project Management that consistency and flexibility cannot co-exist and it robs IT Projects of potential success.

Solid and consistent does not mean rigid or stubborn any more than flexible should mean erratic or volatile.

Becky Tornes Project Manager with Viget (Twitter @beckybitz) just published a really nice post titled “How to Be A More Consistent Project Manager”. I think it’s worth a read.

“Flexible … doesn’t mean we can overlook the importance of being consistent as well. It may seem like these two things are at odds, but they can actually complement each other when you are being intentional about both,” she writes, adding, “Across projects, it’s important we all stay flexible and find the best process and tools for each project and team … Within a specific project, though, team members will depend on you to hold to the processes you’ve agreed to and being consistent will help build trust with the team.”

Hear, hear! Who wouldn’t want Becky on their Project team?

Communication is key to bridging the solid/flexible gap.

You will be familiar with the fairy-tale story of Leicester City who beat odds of 5000-1 last season to win the English Premier League. This term they are fighting relegation and as I write have just sacked the manager who masterminded such a seemingly impossible achievement. What’s changed? Well, they lost a key team member but they won games convincingly last year without him so that may be a red herring and a convenient excuse (one that I hear in many IT Project Management teams too).

What changed most, and let’s couch this in our terms, was the process. Last year Leicester played each game in a roughly similar and highly effective way. It was, give or take, the same eleven players on the field each week and they all knew what they were doing. The trouble is that the other nineteen teams cottoned onto this and came increasingly prepared. It got harder but Leicester stuck to their “process” and the result was that 5000-1 title win, a victory parade and Smooth Radio flying a plane with a congratulatory banner overhead.

This season it seemed like a different team, a different formation, a different playing style every week. Leicester’s players reportedly complained about the manager to the board after he decided to change “everything”, from tinkering with the line-up to replacing chicken burgers with pasta as the post-match meal. The key difference was that when you watched the eleven players on the pitch, unlike last season, they didn’t seem confident that they knew what they were doing.

They were flexible but had lost their solid core and consistency.

In IT Project Management terms, sometimes you have to be flexible and change processes that aren’t working for the sake of best possible project outcomes. However, changing processes without thorough communication with your team can be very disruptive and confusing. In these circumstances, you remain solid and consistent whilst also flexible by ensuring that each team member understands 100% the reason for the change and their role in delivering it. As Becky Torne writes, “Setting up a new tool, changing the frequency of specific communications, or changing how you are communicating can disrupt a team member’s flow, and lead to overall confusion and delays in team members getting work done. It can also hurt your reputation as a solid, dependable team member.”

Master the Basics To Be More Flexible

Project Management techniques, processes and methodologies are evolving all the time in line with business needs – you have to be flexible and adaptable to swim in such fast-moving waters but the key to this flexibility lies in the solid mastery of the basics … planning, preparation, communication, scheduling, budget, etc. Once you have the basics in place you have the flexibility to shift and adapt to the demands of your project.

Budgets, for instance, having a contingency budget for unanticipated challenges buys you the freedom to draft in resources when needed. Efficient scheduling of resources allows you to know which you can switch to fight fires elsewhere within your portfolio without harming the project to which they were originally allocated. Clear lines of communication established in calm times deliver exponentially greater value during a crisis. Master the basics and buy yourself some scope to be flexible.

A Project Management Office Assessment to establish any basic capability gaps is an exercise worth carrying out regularly, either doing it yourself or getting a fresh pair of eyes to take a look will pay great dividends. Once you have identified any gaps – plug them using your in-house resources or by accessing the Project Management as a Service market for solutions.

Knowing When To Say NO!

One the greatest enemies of the solid/flexible balance is work overload. When you get a reputation for being solid and flexible you also risk being the go-to person for … well … for everything. It’s like, “Sure Tom is working on a key business change project right now but he’s a solid guy and flexible let’s have him take a look at these other projects.”

In his book “The 7 Habits of Highly Effective People”, Stephen Covey shared a story about once asking one of his employees to undertake an urgent project. The guy said, “Stephen, I’ll do whatever you want me to do. Just let me share with you my situation.” After showing Stephen Covey his list of projects, he asked: “Which of these projects would you like me to delay or cancel to satisfy your request?” The result was Stephen Covey went off to find another crisis manager – he didn’t want to be the spanner in the works of one the most efficient team members in the business! The section in Covey’s book about “What It Takes To Say No” is a must read for anyone working in IT Project Management.

In conclusion, solid and flexible, at first glance seemingly opposite concepts but in IT Project Management terms almost symbiotic! It’s not a case that they can co-exist, more that they must! Be solid and flexible and who knows one day your local radio station may fly a congratulatory plane above your head.

Did you know that less than 3% of companies actually finish their projects successfully? It is true, and it's a statistical fact that many...
Read more
General Discussion

A project manager needs to head a healthy project team in order to get the job done. How can they keep an...
Read more