How to prevent holiday hold ups delaying your IT Project! 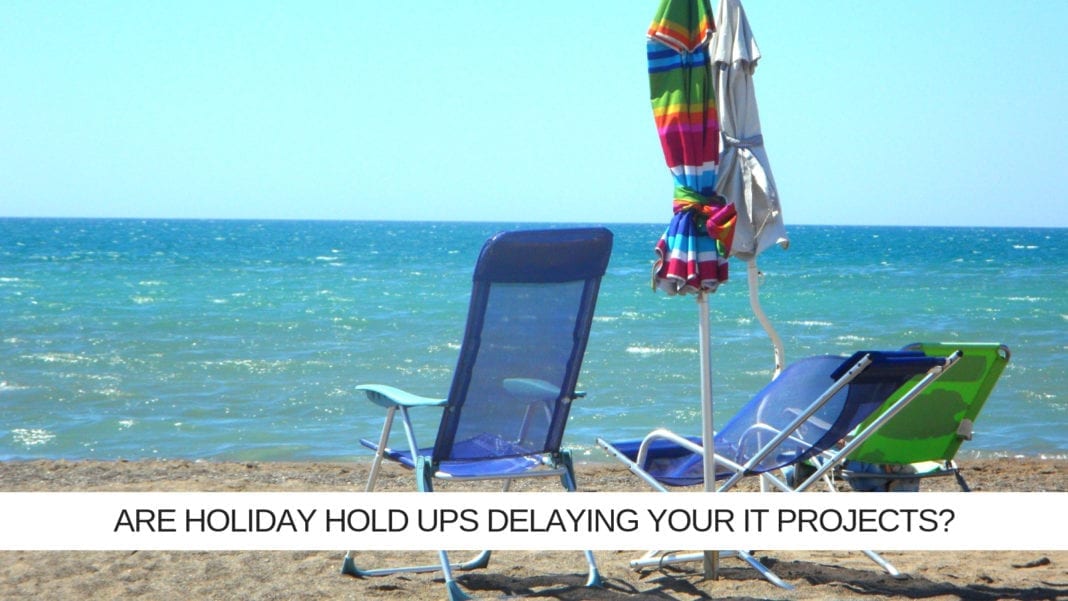 Who is your IT Project’s Leader?

At this time of year, are you really leading or is your company’s calendar more in charge?

I ask because, independently, three Project Managers have told me that they are pulling their hair out because of unanticipated roadblocks along their projects’ critical paths. In each case, the cause is the absence of key decision makers… who are (or are about to go) on holiday.

The worst I’ve heard is friend Steve who sent invitations out for a meeting the following week, for some go/no-go decisions that were about to need addressing. Of the five invited attendees, two replied they could be there, two would be away on their holidays and the last to reply, Mike – the key decision maker (and not his real name) – hadn’t replied by the close of play. Steve chased his request up with an email and eventually got a reply that the diary the following week simply had no room to accommodate the meeting. Mike was also heading for the sun, for three weeks and although he was in the next week, his diary was crammed with clearing down jobs in preparation for his break.

Imagine this, as a Project Manager, four weeks is a long time to have to wait for answers. The go/no-go decisions that were gently approaching the point where a meeting would be needed would become critical issues in that time. Steve picked up the phone and had what he called “a friendly rant” and within minutes the pair were sorting through their matters.

At this time of year, we wee scenarios like this repeated at various businesses to whom we provide Project Management support services and I have often been asked what the solution is. I don’t have the silver bullet, but I do have some thoughts.

Naturally, there are solutions available from the Project Management as a Service sector. The closer your relationship with your partner the better, i.t. the more your services partner understands you, your culture and your priorities, the better they can identify potential issues and key decisions that will need to be taken.

I’m not sure who it was that first said that it’s easier to ask for forgiveness than permission but in cases like these, they were right. The thing is, if you are living and breathing an IT Project, the chances that you’ll make a decision that is harmful to it is very small. Think about it, in the instance above, Steve had a number of suggestions for each of the issues the project would be facing, some would be better workarounds than other but each of them was a “good move” to make. On balance, if the clock is ticking on your project’s critical timeline, doing nothing is usually more harmful than doing something – even if that something is your second or third best option.

3. Change your Culture to recognise priorities and allow time for dealing with them

Mike, the stakeholder with the power to make key decisions in the short case study above sounds very old school to me. In your career, you’ll have met people whose measure of effectiveness is a full diary. It’s a mistake thought, to let “busyness” get in the way of business. Steve’s project had a well-defined business case and strategically it was key to business goals, but Mike was willing to sacrifice these because his diary was full of the workplace equivalent of making sure someone waters the plants and feeds the cats!

Often, holiday roadblocks can be avoided with clear, well defined, unambiguous and proper delegation – i.e. if you trust someone to do something, let them crack on. Of course, if the talent running your IT Projects doesn’t have your trust to make the right decisions then you could graft in more experience from the PMaaS market or set up better systems internally to allow decisions to happen more automatically. One Project Manager we work with takes the proactive approach of emailing key decision makers with a three-step approach. First, he spells out clearly what the challenge is and its potential consequences, second, he gives it a time frame (i.e. when does action need to be taken) and finally he offers his opinion of the best solution. It takes a key decision maker thirty seconds to read, agree and give the green light or a little longer if they have input of their own. Usually, it is a straight instruction to proceed.

In most cases, issues that are accentuated by holiday absence could have been spotted previously and early, well considered and decisive action could have been taken. Take Steve and Mike, to be frank, one of them could have taken a helicopter view of their project weeks ago and flagged up all the challenges that they would be facing down the line. Whose job this is will differ depending on your delegation structure and maturity… BUT how much better for all concerned to have issues nailed early!

This sounds obvious and we sort of touched upon it in point 3 but, it deserves a second pass. IT strikes me that we live in an age of the fastest ever communication with the slowest ever response times. You can ping a question into someones inbox in a second flat but often, the response feels like it’s come by second class post. The problem is all the other noise that your email is competing with. As the sender, you have to get REALLY good at using language that really grabs the attention of the recipient and they, in turn, have to get REALLY good at filtering out all the clutter and dealing with the important and urgent.

I was chatting recently with a retiring CEO and he was reminiscing about the time before email and what he calls “self-service diaries”. He said he has a personal assistant to run his diary, the post would be opened, filtered, allocated and prioritised by this same person and only thing that needed his attention were passed to his in-tray. Anyone with more urgent issues would pick up the phone and during that conversation, they would get sorted. He then compared this to the reality of communication in the firstname.lastname@companyname.com era. Anyone can access anyone about anything, this chap’s personal assistant wasn’t replaced when she retied as he was expected to set an example by running his own diary, etc. He has to make many more judgement calls on what mattered. We all do and, something, we get it wrong.

I love that scene in Star Wars were Luke Skywalker is piloting his X-Wing to destroy the Death Star and he turns off his navigation computer upon hearing from ‘force ghost’ Obi-Wan.

As Project Managers sometimes we over-rely on our fancy Project Management software and IT solutions – of course, we do – we’re in the IT solutions business! However, as a PM friend, Malc once observed: “my butcher isn’t vegetarian, but he sometimes eats carrots.” What he meant was that, sure, we’re in the IT Solutions game but sometimes the best route for the project is more low tech. In the case of Steve above, I can hear “force ghost” Obi-Wan screaming “Use the phone, Steve!”

Point seven then is, trust your instincts and act upon them to get the answers that you need.

In conclusion, holidays have enough delays of their own, whether is striking French air traffic controllers, miles of cones on the M5 or just lots of people waving their Euros ahead of your at the bar, the last thing you need is to come back to find delays with your IT Projects. Have a great holiday.

PS. Looking for an easy holiday read? How about our newly launched E-Book full of Project Management blogs? Download your FREE copy and take it away with you!

Find out more about Project Management as a Service