A poor workman blames his tools – is this true in IT project management? 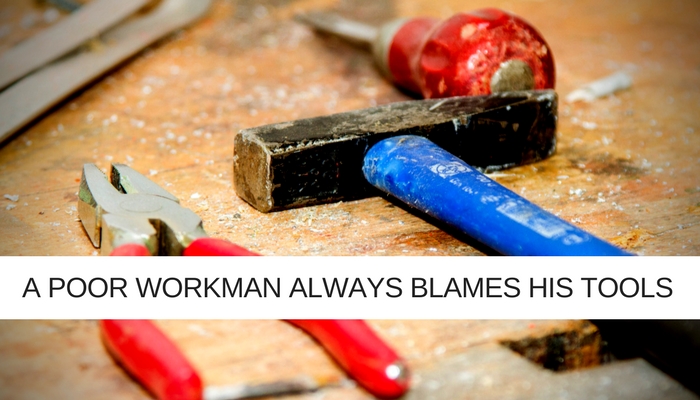 Becoming a marketing project manager – what do you need to succeed

“It’s a poor workman who blames his tools.”

I heard this, for the first time in years, during the analysis of why an IT Project had failed to deliver. It got me thinking.

It seems, according to a recent poll that only 5% of project teams have found the right tool for them.

Only 5% say that they use just one.

So rather than criticising Project Managers for blaming their tools perhaps we should be listening to what they have to say. The fact that 95% of PMs are jumping from one tool to another as part of their daily workflow suggests a number of things. The two main that crossed my mind were that either there is a lack of alignment between project management tools available and the processes used by project managers on a daily basis, or could it be that 95% of project managers are not using one perfect tool to its full potential, possibly duplicating work in the process.

As always, the answer is probably somewhere in between.

For instance, a Project team I worked with last year had bought a well known collaborative Software as a Service (SaaS) solution for day to day project management but was still using email and Google Sheets as its main means of internal project communication. Despite the fact that the SaaS app boasted this as a key feature, the project team were duplicating workload, transferring data from tool to tool, to communicate. Why? Because this was the way they had always done it and there was safety in their comfort zone. While this may be true, there was also the occasional mistake, like when a figure was copy pasted into Google Sheets but the whole of the number had not been selected for copying in the SaaS app and the guys spent half a day trying to work out why things didn’t add up.

Another Project Team working in exactly the same way as described above told me that collaboration is a key feature that they need but which their current project management software does not offer. Their reason for choosing this software is that in every other way it is perfect, it fits their modus operandi like a glove and they fear that switching to a new software solution might impact that efficient running. Perhaps it would, but Project Managers are the leaders of managing change so they would soon get the hang of their new software and any short-term discomfort would be more than compensated by improved communication.

A study by Technalysis showed the issue clearly when it reported that 75% of internal communication happened over email, phone call, or text rather than a central project management system. In other words, three-quarters of all communication meant duplication of work in one way or another.

Most of the time teams are just not aware that they are working inefficiently. My anti-virus software popped up today to tell me my PC was running slower than it could because of a range of redundant apps, junk files, etc. I had no idea. I authorised the software to do the house-keeping it recommended and my PC is running faster. The point is that I’d lived with the slower processing speed as it had been so gradual that I hadn’t noticed. The same is often true of Project Teams, why would you know that there is a better way to work if all you have ever done is work the way you do? Who has time to look outside their own Project Management bubble for best practice elsewhere? Who isn’t too busy managing projects to have that kind of luxury?

A really good idea is to carry out a Project Management Office analysis. You can do this yourself or (and it’s usually more productive) you can get a third party, independent pair of eyes to do it for you. It usually saves you more than it costs. As well as pointing out glaring capability gaps, a PMO assessment can suggest subtle ways that you can improve your efficiency, like using your current tools to their full potential. This was the case with the project team who were using email and Google Sheets to communicate and not the messaging capability of their Project software. I remember the CEO being cynical, expecting my analysis to cost them money – when I put it to them that they could improve communication, boost efficiency, cut workload and reduce mistakes by fully using software they’d already paid for he was ecstatic.

When Constable thought, “I think I’ll paint a Hay Wain”, he didn’t head out to his shed and grab a roller and some emulsion. Admittedly, he would still have done a better job than me. Instead, you suspect, he used his skill, experience and judgement to select exactly the right tools for the job and in doing so created a masterpiece.

For your next Project to be a masterpiece, choose the right tools, not just the ones you’re comfortable with or the ones you’ve always used. Ultimately, it’s not a poor workman who blames his tools but rather one that chooses the wrong tool or doesn’t use the right tools to their full potential.

Becoming a marketing project manager – what do you need to succeed